Is it a Win-win situation? 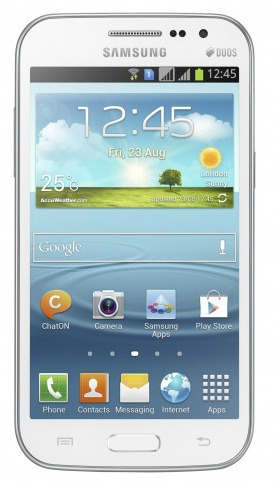 At first glance one might think it’s simply a copy of the Samsung Galaxy SIII, and you’re not entirely mistaken; the win is just more of a mid-range device, sporting a WVGA touchscreen, 5 megapixel rear camera and a Li-ion 2,000 mAH battery.

The release was finally confirmed by Samsung China due to the multiple leaks that have preceded the official confirmation.

The handset is integrated with 8GB of internal memory, however, this will diverge depending on the market. The device also comes with 1GB of RAM and a microSD slot that supports cards up to 32 GB.

Consumers will be able to enjoy dual-SIM support with the new Samsung Galaxy Win, as well as the ability to shoot video at a commodious 720p (15 frames per second). The playback content will be available at the same resolution; however it will be elevated up to 30 frames per second.

There is an additional VGA camera on the front, but Samsung has not declared the resolution for this one just yet.

The new handset runs on Android 4.1 Jelly Bean, but has Samsung’s TouchWiz skin stapled over the top with the accustomed banquet of OEM-specific apps and features such as “Easy Mode”, “Smart Alert” and “Motion UX”.

It will be available in two colors; Ceramic White and Titan Grey. Samsung is elucidating this as “an intuitive new smartphone designed to balance the needs of the on-the-go user with massive processing power.” While we do agree that the quad-core processor is indeed quite ample, but the specs fall behind the recently unveiled Samsung Galaxy S4.

When it comes to the price, Samsung has not yet unveiled it but as soon as it does we’ll let you know.