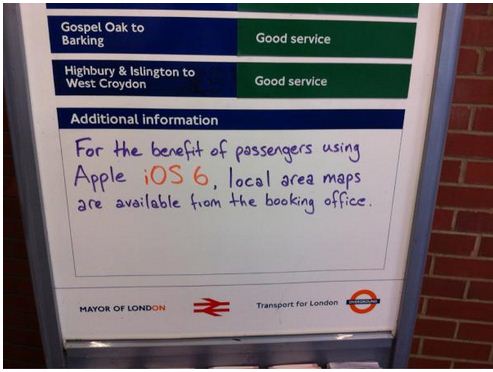 This past week or so, we’ve been bombarded with Apple news everywhere, whether we are Apple fanatic or not, we had to listen. Yet, yesterday, it was not all sunshine and rainbows for the Tech Giant for it faced major ridicule due to its ill-performing new maps tool.

it with its very own Maps App, one that operates through the usage of data that is provided by navigation systems such as Tom Tom. Yet, it seems that Apple was too quick to launch the App for users were quick to notice the many ways the company erred.
Ireland’s very own Minister for Justice, Alan Shatter, voiced his dissatisfaction with the iOS 6 system that placed an airfield in the middle of a city farm.

The 3D function also hit many faulty notes such as misplacing many well-known landmarks, placing streets over bodies of water, not to mention the foggy, distorted images.

Disappointed iPhone users were quick to share their horrific experiences by uploading their ‘map fails’ onto a Tumblr blog, which quite bluntly declare “The Apple iOS 6 Maps are amazing. Not.” 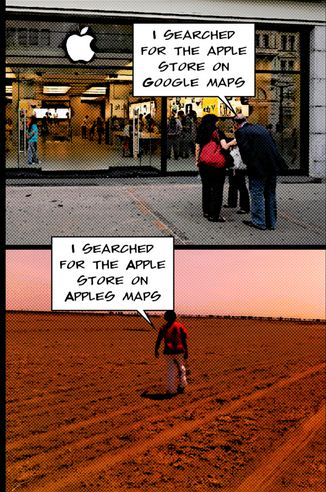 The conversation has been so viral that it became trending on Twitter with tons of dissatisfied users sharing ways of reverting to the preceding Google maps function.

Tom Tom clearly dissociated itself from the faulty App, stating it solely provided Apple with the data and was in no way responsible for how that data was used.

A spokesman justified the malfunction saying that the user experience will be enhanced once more users will start to contribute as well as adding additional features such as visual imagery.

“We are confident about our map quality, as selling 65 million portable navigation devices across the world and more than 1.4m TomTom apps for iPhone in the past two years reaffirms this quality.”

In addition to Maps, Apple has also decided to abandon its native YouTube App. A dedicated YouTube App was instantly released and surly enough, performed considerably better than its predecessor.

Well, facts are facts, and Google has a record of more than 7 years in the business of digital mapping, a period that has allowed for them to build a substantial amount of invaluable data. Apple is surly mislead if it thinks they will come even close in the next year or years. Rumor has it, that Google Maps is working on an iOS dedicated app and is just pending Apple’s approval; we don’t know about you but we’re not too keen on Apple’s approval.