Eco-friendly, beautiful and pollution free; the new glow in the dark pavements! 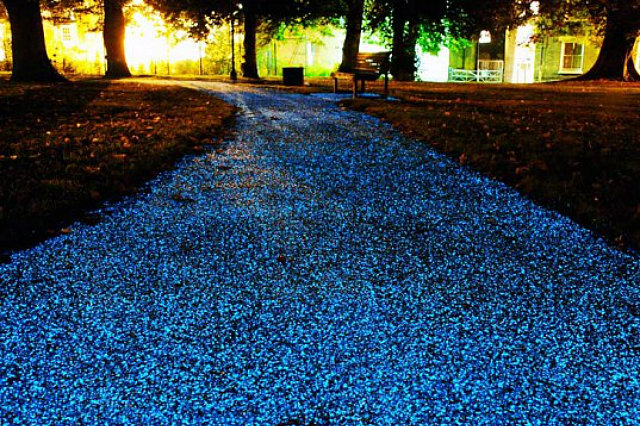 While it might be very romantic to take your significant other out for an evening cycling date, this little romantic gesture is quite costly; for keeping the parks well illuminated at night for the safety of pedestrians and cyclists is neither cheap nor environmentally healthy. However, a British-based company has thought up of a way that will turn park paths into glow-in-the-dark promenades that serve as energy-friendly works of art.

Starpath, envisioned by Pro-Teq, is a spray applied elastomeric coating of light-absorbing particles that cultivates ultra-violet rays from the sun throughout the day and emphatically brightens up just like a starry sky at night.

The exterior is non-reflective, anti-slip and waterproof. It can be exploited for wood, tarmac, cement or any other solid surface.

Starpath was tested earlier this month on all 1,600 square-feet of the paths at Christ;s Pieces Park, in the university town of Cambridge. Cyclists as well as pedestrians keep the part well occupied late into the evenings.

“Our surface works best over tarmac or concrete, predominantly tarmac, which is the main bulk of the U.K. path network,” says Pro-Teq’s Neil Blackmore, in a sales video. “When it’s coming to the end of its useful life, we can rejuvenate it with our system, creating not only a practical, but a decorative finish.”

ProTeq observed that many local city councils were progressively shutting off park lights at night as means of saving money. However, to maintain public safety, ProTeq came up with the idea of Starpath to serve bot the financial and environmental issues of overhead lighting. This is quite a universal issue for in the United States alone; cities usually regard streetlights as their first or second biggest energy exhaust.

There are even more perks of using glow-in-the-dark spray; its non-reflective surface strays from being a cause of light pollution, the cause of restrained nighttime vision as well as endangering the local wildlife due to constant illumination.

One largely important benefit to overhead street lighting is the obviation of crime. It is not clear yet if Starpath would be able to provide enough brightness to accomplish the same result.

Whether its utilization could extend to some roadways is yet to be determined, but at least for now, Starpath seems to be an energy-efficient way to light up parks while simultaneously turning them into eye-catching art exhibitions.