The iPad; did Steve Jobs start working on it in the 80s? 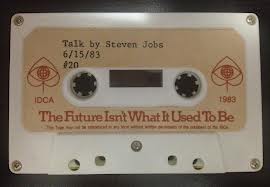 It’s almost been a year since Steve Jobs passed away and yet his legacy will surly live on for centuries to come, and debates over his unprecedented foresight will be the topic of many articles to come. One particular talk he gave back in 1983 at the Center for Design Innovation has received a lot of interest.

That specific talk compromised a ton variety of topics that ranged from wireless computing to the project that would become Google StreetView. Yet, an intriguing new discovery of an original cassette tape of that speech has added a spicy spin plus an additional 30 minutes or so of Q&A after the actual main talk.

The topics discussed are quite mesmerizing. One of which was computer networking; a notion that would lead to the App Store, and better yet, this notion would lead to the discovery that Apple has started creative work on the well-recognized iPad- yes 27 years prior to its release.

Steve was inquired as to how computers would all work together, and he gave glimpses of the inevitability of a universal networking standard that allows them all to communicate.

Here are a few of the most memorable things Steve mentioned in this amazing talk:

 The personal computer is tackled as being a new medium of communication. Bear in mind, this was in a time when networking was not yet conventional nor was the Internet as widespread as it is now. Still, Steve talks in grave precision about early e-mail systems and how it reframes communication. He states, back in 1983, the idea of walking around anywhere and receiving e-mails; 20 years ahead of the mobile computing.

 An experiment done by MIT is mentioned, one that resonates a lot like the Google StreetView application.

 Early networking is discussed and the problems of different protocols that existed then. He gave predictions about solving the networking problems at the office and at home, giving an estimated of 5 years for the former and 10-15 years for the latter. He was spot on.

 An early Apple strategy is put forth and discussed, stating that it is Apple’s mission to “put an incredibly great computer in a book that you can carry around with you that you can learn how to use in 20 minutes”. Oh, can you relate this to anything you are using today? We bet you do, and oh they also wanted to do so with a “radio link” to ensure people would not be required to hook it up to anything to communicate with “larger databases” and other computers. Insightful!

 A question is raised, just at the end of the Q&A session, around the voice recognition, a notion that was about a decade away from realization. When linking Siri to his talk that day, it’s insightful to hear what Steve had to say about that technology then and there; he mentioned the difficulty he faced of recognizing language vs voice since language is contextually driven.

So finally, here is the recording of the talk from the 1983 IDCA. The formerly unavailable Q&A session begins at around 21:30 of the recording. Please be noted that the majority of the questions posed by the audience are incomprehensible, yet Jobs’ responses give meaning to them.